Using Social Media at the Fancy Food Show: How We Did it…

To promote the PA Exhibit area at the Fancy Food Show in Washington, D.C., we followed our own advice and took the before, during and after approach to utilizing social media.  Here’s how and what we did:

Before
As soon as we secured our booth space, we started promoting the PA Pavilion on twitter.  Approxmately six months before the show a designated hashtag was created for the Fancy Food Show along with the hashtag for the trade association putting on the show:  #sffs12 and #NASFT.
From that point on we incorporated both hashtags in all our trade show related tweets and started following the hashtag.  We tweeted the booth numbers of the PA Pavilion exhibitors and about the products and brands that would be represented in the PA Pavilion.  We also started retweeting things that would be interesting or helpful to other exhibitors, which started conversations between us and other exhibitors.  Primarily we kept promoting PA’s presence, especially the companies within the PA Pavilion through twitter.  We also learned about the official tweet up for the show by following this hashtag.  In addition, we posted a few times on facebook to reach an audience on a different platform.

During
We tweeted pictures from before set-up, during the show and tear down of the PA Pavilion booths.  Since we had eight participating companies, we tweeted individually about each company as well as collectively. What did we tweet about?  We put out messages about visiting the PA booth, what types of products/brands were in PA booth, about other PA exhibitors, retweeted facts about the show itself and educational seminars that occurred during the show.  We really promoted the PA booth several times a day through different tweets to attract participants to the "PA Aisle".  All these tweets contained the hashtag, so they were seen by everyone monitoring the hashtag at the show.  Our focus was really promoting the companies in the PA booth, while still providing other relevant show information. From set up to tear down, we shared the PA companies’ Summer Fancy Food Show experience via twitter.

After
Throughout the show, as well as after the show, we thanked everyone who interacted with us on twitter. A simple thank you for recognizing our tweets and either sharing them or replying to them is important. We also thanked everyone who participated in our booth and who met with us during the show.  We blogged a recap of the show in three different ways:  the show itself, pictures and this social media related post.

Things to Consider for Next Time:
This year we didn’t actually have our own booth - there was such a demand for space by companies that neither the State's Center for Trade Development nor the WTC had a spot within the PA Pavilion.   Next year we hope to have a small portion of a booth to better promote the PA food industry in general.  This will allow us to have fun giveaways that feature PA on foursquare, twitter, and facebook!

The Pennsylvania Pavilion at the Summer Fancy Food show was organized by the World Trade Center of Central Pennsylvania in conjunction with the Commonwealth’s Center for Trade Development and it was funded in part through a STEP grant award from the U.S. Small Business Administration.
By World Trade Center Harrisburg - June 27, 2012 No comments:

Seen at the Fancy Food Show


﻿
﻿
﻿ ﻿
﻿
﻿Some eye catching exhibits:
(for more pictures of exhibits, visit our trade show board on Pinterest) 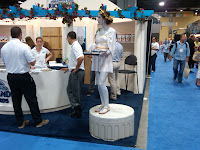 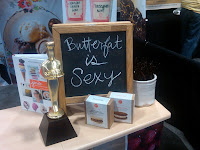 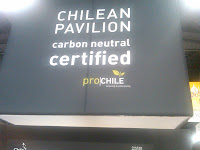 ﻿﻿﻿﻿
I was truly lucky to be with Melissa at this trade show, as she had an uncanny talent for recognizing and meeting celebrities throughout the show:

We also visited with the other 43 PA companies that were exhibiting at the show outside the PA Pavilion:
﻿
﻿﻿

﻿﻿ ﻿﻿﻿
The Pennsylvania Pavilion at the Summer Fancy Food show was organized by the World Trade Center of Central Pennsylvania in conjunction with the Commonwealth’s Center for Trade Development and it was funded in part through a STEP grant award from the U.S. Small Business Administration. 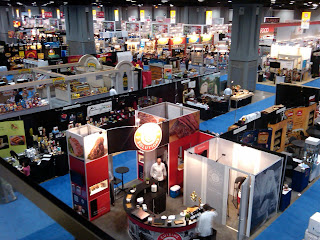 The World Trade Center of Central PA in conjunction with the State of PA’s Office of International Business Development organized a PA Pavilion at the Summer Fancy Food Show in Washington DC from June 17-19, 2012.  This initiative was funded in part through a STEP grant through the U.S. Small Business Administration.


The Summer Fancy Food Show is organized by the National Association for the Specialty Food Trade (NASFT). NASFT is the preeminent not-for-profit business trade association established in 1952 to foster trade, commerce and interest in the $70 billion specialty food industry. The NASFT is an international organization composed of domestic and foreign manufacturers, importers, distributors, brokers, retailers, restaurateurs, caterers and others in the specialty foods business. The organization has more than 2,900 current member companies throughout the U.S. and overseas.


Since 1955, the Fancy Food Shows have been North America’s largest specialty food and beverage marketplace. Between the Winter Show in San Francisco and the Summer Show in New York City (2011 and 2012 in Washington DC), the National Association for the Specialty Food Trade events bring in more than 40,000 attendees from more than 80 countries to see 260,000 innovative specialty food products, such as confections, cheese, coffee, snacks, spices, ethnic, natural, organic and more.


Only NASFT members can exhibit at the Shows, where retailers, restaurateurs, distributors and others discover innovative, new food and beverage products. The Shows are attended by every major food buying channel, influential members of the trade and consumer press and other related businesses. The Summer Fancy Food Show included 2,400 exhibitors from 80 countries & regions.
Eight companies participated in the PA Pavilion:
The PA Pavilion was located alongside the other state exhibits and across from the international pavilions.

The Importance of Export Compliance & Procedures


While it is not a requirement to have an export compliance program in place, written policies and procedures are not only a good idea, they could be a mitigating factor if export violations are found.
Here is a sampling of issues that come up, but this is by no means an exhaustive list:

Denied Party Screenings - companies may not realize that they are required to screen their customer at time of quoting and again at time of shipment against the denied party lists. Dealing with entities on the denied party lists is prohibited!   Fortunately, the various US government agencies that maintain their own denied party lists, have recently combined efforts, which  makes screening a lot faster. The combined list can be accessed at the export.gov site, at the bottom of this screen.

Export Documentation - proper documentation starts with using the correct harmonized codes for your products and determining if the product is at all controlled (see below) and if there are any embargoes or sanctions in effect for the ultimate destination.  It also includes the mandatory AES filings, proper certificates of origin (especially important when claiming preferential tariff, such as in a NAFTA certificate of origin) and completing all required export documents.

Under-reporting Value on the Commercial Invoice - we actually get this question ever so often:  "my customer asked us to report a different value on the commercial invoice than the actual amount, how much do companies usually reduce their amount by?"  Do NOT under-report!   The reason foreign buyers may ask for a lower value is to evade duties and taxes - remember, the value on the Commercial Invoice matches the value that the purchaser paid for the goods.

Proper Recordkeeping - generally all export records need to be kept for 5 years and US Customs may request to see your records at any time.


Foreign Corrupt Practices Act - the FCPA prohibits corrupt payments to foreign officials for the purpose of obtaining or keeping business.  Individuals and firms may also be penalized if they order, authorize, or assist someone else to violate the anti-bribery provisions.

Anti Boycott Act - the antiboycott laws were adopted to encourage or require U.S. firms to refuse to participate in foreign boycotts that the United States does not sanction, basically preventing U.S. firms from being used to implement foreign policies of other nations which run counter to U.S. policy. (an example of this would be the Arab League boycott of Israel)

Export Controls - controls are established to prevent the acquisition of technologies, technical data and information by parties hostile to the United States.  They also protect U.S. economic interests and foreign policy goals.  There are three federal agencies that administer the export control regulations in the United States:

Companies whose products are controlled need to get a license from the regulatory agency before even proceeding with sharing information.  The vast majority of all US exports (well over 90%) are shipped without special licenses, but for those companies whose products fall under the controls of the US Commerce Department, a great resource for developing and Export Management Program can be found on the BIS website. For products that fall under State Department controls, information on complying with ITAR are available here.

Just in case you really wanted to know, Title 15 of the Code of Federal Regulations contains the export laws, and it can be accessed at the e-CFR site.

We have been conducting a very informal survey of freight forwarders, bankers, expediters and export control agencies over the last two years.  Basically, we ask them to estimate the number of export shipments that are NOT in compliance with US export laws.  Their general consensus is around 75% are not complying (some estimated this number as high as 90%).

Remember, violations and noncompliance penalties can carry significant civil fines, jail time and suspension or revocation of export privileges. By putting export policies and procedures in place, risks of noncompliance can be significantly reduced.


Even with the ease and efficiency of the Internet and technology to connect companies with new business, tradeshows are still a must-attend event.  The marketing and promotion of these tradeshows, however, is changing.   Social media is a fast, engaging way to reach your audience before, during and after your show.  Social media has become another tool to utilize in conjunction with traditional media to attract more traffic to your booth.
Many tradeshow organizers have recognized the use of social media and have developed activities around it during the show.  Many have developed hashtags for tradeshows on twitter (or one has been organically already created).  Anyone posting in this hashtag will be searchable via this “term” and allowing more people to connect with your company.  Additionally, many organizers have developed “tweet-ups” for participants who engage in twitter and want to meet others at the show who do as well.  Furthermore, some organizers even offer seminars on best practices of social media for companies during the tradeshows as well.

The most important thing to remember when using Social Media at tradeshows is to be sure you are engaging in order to drive traffic to your booth, not just posting information.  Be sure to start the engagement early and continue the conversation even after the show!
By World Trade Center Harrisburg - June 05, 2012 No comments: