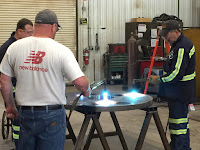 World Trade Center Harrisburg partner CORE PA Global hosted a tour for seven journalists to showcase Pennsylvania companies involved in the mining, oil and gas field from June 13 to 17, 2016. The tour took place in the western part of the state, beginning in Berlin and ending in New Castle. Hannah accompanied the tour for the week as a Core PA Representative.

The tour was CORE PA funded and executed, with additional support from the TEAM PA
Foundation, Pennsylvania Department of Community and Economic Development (DCED), and Tierney, a public relations firm, whose services were secured through DCED.

With the "core" region of Pennsylvania having a large, diverse manufacturing history, inviting international journalists to tour the Commonwealth is beneficial for attracting foreign direct investment into the region. They are able to gain first-hand experience, which makes for a stronger story and a lasting connection. The ultimate goal is to send a message to prospective foreign investors that Pennsylvania is a great place to do business. 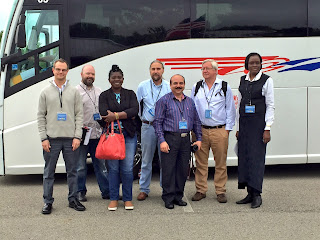 The tour featured presentations and site visits to the following industry leaders:


Throughout the tour, the journalists also heard keynote presentations from local partners about their respective regions' economic development initiatives and opportunities, leaders and experts from the industry, and other complimentary companies.

A few of the journalists have already publicized their articles. You can read their reports by clicking here.

SEDA-Council of Governments is the host organization for CORE PA Global, which is an
initiative established to increase the visibility of a 53-county footprint of Pennsylvania to
international and domestic investors. The initiative partners with over 50 economic development organizations and the Commonwealth of Pennsylvania to attract, retain and grow business and industry in the region.

Core PA has hosted several tours to date, with this being the second tour with a mining, oil and gas focus. WTC Harrisburg previously participated in the first tour - focused on the food industry - when they came to York, PA in 2014.

China recently amended its customs declaration requirements to capture new information that may make it easier for the General Administration of Customs to target potential customs valuation issues.  Specifically, importers are now required to identify whether the buyer and the seller are related; whether that relationship influenced the price charged; and whether the importer is making any royalty payments.  A client alert my colleagues in China prepared on these changes may be found here.

Given the increased scrutiny China Customs has paid to related party transactions and the payment of royalties in recent years, we expect that the new declaration requirements will only intensify this trend.  If you are importing into China, you need to be aware of these issues and be sure they are adequately addressed (e.g., have you confirmed whether royalties are being paid and, if so, whether they are dutiable for customs purposes?).