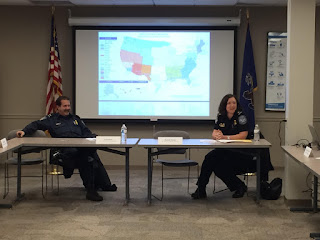 At our recent World Trade Center round-table event, we had the opportunity to meet with Michelle Stover, Port Director, and Scott Merlo, Officer, from the U.S. Customs and Border Protection's Port of Harrisburg office.

They were able to share their mission as part of CBP's Field Operations and some of their personal experiences that they have had while protecting U.S. borders over the years. They also provided helpful advice for attending companies on various different aspects of travel and trade, including the best ways to seek help or information. They also touched upon the operational elements of trade, such our local Foreign Trade Zone.

The U.S. Customs and Border Protection's Mission
Within the U.S. Customs and Border Protection, the Office of Field Operations focuses on guarding the physical and economic security of the United States by controlling access to the country. In the words of our speakers, they keep the "bad people" and "bad things" out. Simultaneously, the office facilitates international trade and travel by not only sustaining an essential aspect of the U.S. economy but also by ensuring its integrity. The six enforcement authorities that fall under the Office of Field Operations' domain are anti-terrorism, facilitation of lawful travel, cargo security, seizing contraband, trade enforcement, and agriculture quarantine inspection.

Impact on Border Security
Michelle Stover and Scott Merlo's presentation provided numerous statistics showing the impact of border protection. In 2014, nearly 8,000 people wanted for serious crimes were arrested by CBP officers. The total number of arrests at the border was around 21,000 people. The CBP also plays a large part in preventing inadmissible aliens and high risk inadmissible travelers from entering the United States. In 2014, 224,000 inadmissible aliens and 11,494 high-risk travelers were denied entry to the U.S. Additionally, the CBP seized over 800,000 pounds of drugs in 2014 and seize $700,000 in counterfeit goods every day. 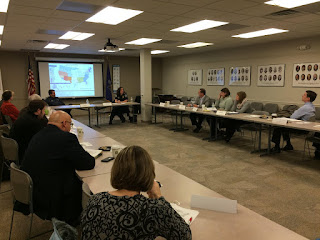 In our discussion following the presentation, attending business representatives had the chance to ask questions to the CBP officials. One topic that was explored in depth was the Central Pennsylvania Foreign-Trade Zone (FTZ #147). Foreign-Trade Zones are designated properties where U.S. based companies have the opportunity to defer, reduce, or sometimes eliminate Customs duties that are admitted and transported through the FTZ. The sites are intentionally located to offer convenience to businesses; typically there is easy access to on-site inter-modal transportation connections (including air, road, and rail). The Foreign-Trade Zones essentially facilitate international trade for the region's businesses, offering a competitive advantage ahead of other companies abroad. To learn more about the benefits of the Central Pennsylvania Foreign-Trade Zone (FTZ #147) and its effect on export duties, please visit their webpage.


Of all the information shared, Michelle and Scott emphasized that the U.S. Customs and Border Protection works to not only protect the nation and its citizens from "bad", but to also enable "good". They are here to facilitate a thriving economy rooted in international trade and travel!
By World Trade Center Harrisburg - November 30, 2015