We had a lot of fun during this year's tour of the Philadelphia seaport and UPS hub at the Philadelphia airport - thanks to our enthusiastic hosts, Adam Say and his team mates at UPS, and Dominic O'Brien and his colleagues at the Philadelphia Regional Port Authority. Thanks to both organizations for helping us once again organize this tour! 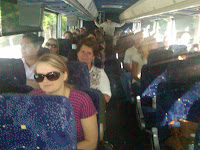 Adam kept everyone entertained by raffling off prizes during the drive to Philadelphia - all participants received raffle tickets and everyone was a winner.  (On the way back we had to work to win additional prizes, as Adam kept a "trade trivia" game going. ) 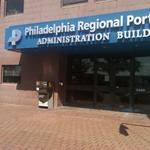 The tour started at the seaport - which happens to also be a military port, and thus we were not allowed to take any pictures ourselves.  But if anyone is interested to learn more about the port and the operation of it, there is a lot of information on the PRPA website.  We toured the Packer Avenue Marine Terminal, which is the Port's largest facility, and we saw state-of-the-art handling for cargoes such as containers, steel, perishables, and heavy lift cargoes.  Products from our region were on the docks, ready to be shipped.  Lunch was hosted at the PRPA headquarters, near the Tioga Terminal, and Dominic provided an overview of the port's capabilities, its history and ongoing improvement projects to meet future demands. 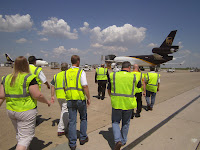 We then traveled to the Philadelphia International Airport for a tour of the UPS facilities.  We were met by two UPS pilots who provided some insight into air cargo movement, and then took us for a tour into their cargo planes. 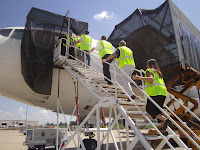 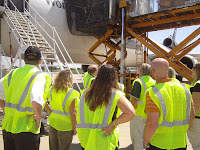 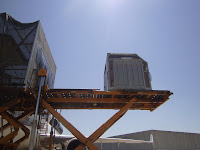