Nuremberg: An Interactive Booth Is Key

Tradeshows require months of preparation including booth design, scheduling appointments with key customers, transporting all product and materials to the show, plus setting up the booth at the show. It is worth it, especially when you attend the world’s biggest toy fair in Germany and arrive back to tell your team “this was one of the best shows we’ve ever had.”

RoomMates Decor’s International Director of Sales, Adam Say, can certainly attest to that! RoomMates, the largest producer of Peel & Stick Decor and Wall Decals, sells to 75 countries around the world, and through Nuremberg was able to make contact with countries where distribution did not yet exist. Say, among many others at the show, connected with potential distributors, as well as licensing companies to discuss hot new products in the international markets. 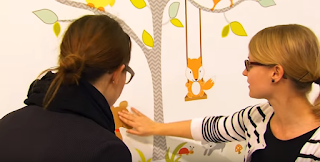 “It was a great show to see the trends because all of the big toy manufacturers are there. We were also able to connect with new retailers and put them in touch with distributors around the world,” said Say.

One of the most memorable discussions Say revealed was discussion around the booth! “People talked a lot about how creative the booth was.” Say described that the booth featured true to size wall decals that popped out of the wall, which attracted the attention of buyers and even those who wouldn’t normally be interested in the product. Customers were encouraged to experience RoomMates wall decals firsthand by peeling and re-sticking them to the booth walls.

A good booth display is key for attracting attendee’s attention, especially at a show like Nuremberg where interactivity and creativity are highlighted throughout the show floor. It’s tricky selecting which characters and products to feature in the booth when there are so many strong contenders. The characters that received the most attention? For RoomMates, the new Batman wall decals, Superman wall decals and Shopkins wall decals were very popular at the show, while Star Wars wall decals and Frozen wall decals continued to show strength in customer demand. 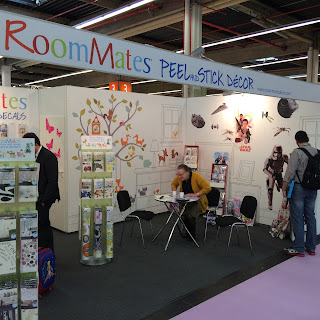 In addition to RoomMates, robots, dinosaurs, and puzzles were popular themes around the show floor as well as games for both kids and adults. Take a 70 second “virtual walk” around and discover more products and innovative toys on the market!